What a fascinating creature!

A sand dollar (Echinarachnius parma) is an echinoid, a type of invertebrate animal whose skeletons—called tests—are commonly found on beaches the world over. The test is usually white or grayish-white, with a star-shaped marking in its center. The common name for these animals comes from their likeness to silver dollars. When they are alive, sand dollars look much different. They are covered with short, velvety spines that are colored purple to reddish brown.

Living animals of the common sand dollar (Echinarachnius parma) species are generally sub-circular, measuring approximately 2–4 inches across, and are coated with spines that are purple, reddish-purple or brown in color.

The test of the sand dollar is its endoskeleton—it is called an endoskeleton because it lies underneath the sand dollar's spines and skin, and it is made of fused calcareous plates. This is different than the skeletons of other echinoderms—sea stars, basket stars, and brittle stars have smaller plates that are flexible, and the skeleton of sea cucumbers is made up of tiny ossicles buried in the body.

The top (aboral) surface of the sand dollar test has a pattern that looks like five petals. There are five sets of tube feet that extend from these petals, which the sand dollar uses for respiration. The sand dollar's anus is located at the rear of the animal—found in the edge of the test below the single vertical line extending from the center of the star. Sand dollars move by using the spines located on their underside.

There are many species of sand dollars. Besides E. parma, those found commonly in the United States include:

Sand dollars are classified as follows:

Common sand dollars have been found throughout the North Pacific and eastern North Atlantic oceans, at locations from just below the intertidal zone to more than 7,000 feet. As their name suggests, sand dollars prefer to live in the sand, in densities ranging between .5 and 215 per 10.7 square foot. They use their spines to burrow into the sand, where they seek protection and food. Adult sand dollars—those over 2 inches in diameter—live in the intertidal zone.

Most sand dollars live in seawater (saline environments), although some species do occur in estuarine habitats which combine of river and lake water, and are chemically distinct from saline or freshwater environments. Studies show that sand dollars require a certain level of salinity to fertilize their eggs.

Sand dollars feed on small food particles in the sand, typically microscopically sized algae, but they do also eat fragments of other animals and have been classed as carnivores according to the World Register of Marine Species. The particles land on the spines, and then are transported to the sand dollar's mouth by its tube feet, pedicellaria (pincers), and mucous-coated cilia. Some sea urchins rest on their edges in the sand to maximize their ability to catch prey that is floating by.

Like other sea urchins, the mouth of a sand dollar is called Aristotle's lantern and is made up of five jaws. If you pick up a sand dollar test and shake it gently, you may hear the pieces of the mouth rattling inside.

There are male and female sand dollars, although, from the outside, it is difficult to tell which is which. Reproduction is sexual and accomplished by the sand dollars releasing eggs and sperm into the water.

The fertilized eggs are yellow in color and coated in a protective jelly, with an average diameter of about 135 micros, or 1/500th of an inch. They develop into tiny larvae, which feed and move using cilia. After several weeks, the larva settles to the bottom, where it metamorphoses.

Juveniles (under 2 inches in diameter) are found in the subtidal zones and slowly migrate into exposed beach areas as they mature; the smallest are found in the highest beach elevations. They can bury themselves in the sand up to two inches deep, and very dense populations can stack themselves up to three animals deep.

Sand dollars may be affected by fishing, especially from bottom trawling, ocean acidification, which may affect the ability to form the test; climate change, which might affect available habitat; and collection. Reduced salinity lowers fertilization rates. Although you can find plenty of information on how to preserve sand dollars, you should collect only dead sand dollars, never live ones.

Sand dollars are not eaten by humans, but they can be prey for sea stars, fish, and crabs. 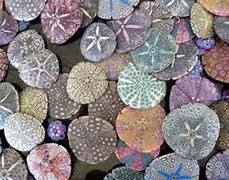 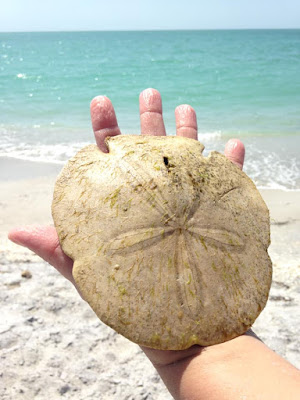 Look for some the next time you go to the beach!