It was 100 degrees here yesterday for a little while! 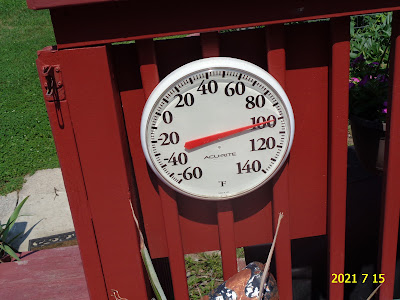 If it was hot by you, too - here's a little something to cool 'ya off!

Perhaps the best-known member of the New Hope Railroad’s locomotive fleet, No. 40 has been entertaining visitors to the Bucks County countryside for several decades.

This locomotive’s story begins at the massive erecting hall of the Baldwin Locomotive Works in nearby Philadelphia, PA. Outshopped in early December of 1925, it has a 2-8-0 wheel arrangement, two pilot wheels, eight drivers, and no wheels trailing. This model of locomotive is also known as a Consolidation.

The Lancaster & Chester Railway (LC), a twenty-nine mile shortline headquartered in Lancaster, SC, took delivery of No. 40 for the price of $25,125.96. Soon after, it could be seen hauling freight trains between the railroad’s customers and an interchange with the larger Southern Railway. Most freight hauled consisted of textile products from the large Spring Mills Company in Lancaster. For the majority of its life on the LC, the locomotive was largely used as a backup to the line’s other steamers.

The LC would dieselize their trains following the conclusion of World War II, with No. 40 retired and sold to the Cliffside Railroad of Cliffside, NC in 1947. Like the LC, the Cliffside was predominantly a textile hauler.

During its time in North Carolina, similar to LC years, No. 40 was primarily used as backup power due to crew preference of working with the road’s other locomotive, a smaller 2-6-2 Prairie type No. 110. The big Consolidation would usually only be fired up if its stablemate was down for repairs, or if train size required the use of more than one locomotive.

No. 40 was retired once more in 1962 when the Cliffside began acquiring replacement diesels. Later that year, the locomotive would travel back north after being acquired by the upstart Steam Trains Inc. The group moved their new acquisition to the Reading Company’s roundhouse in Wilmington, DE for storage. It would be housed there for a few years before being moved once again, this time to the Reading’s shops in the anthracite coal region town of St. Clair, PA.

At St. Clair, the old firebreather would see some cosmetic refurbishment in anticipation of a future passenger excursion career. When the northern portion of the Reading Company’s New Hope Branch was acquired by Steam Trains in 1966, No. 40 journeyed to Bucks County with the rest of its owner’s fleet of vintage equipment. For this mid-summer move, the locomotive was dead in tow, with stablemate 4-6-0 Ten-Wheeler No. 1533 providing the power.

During the first few years of operations for the New Hope & Ivyland Railroad (NHIR), the new name of Steam Trains, No. 40 was mainly a static display around New Hope yard due to operating crew preference for No. 1533. In 1967, it saw a brief period of operation when the Ten-Wheeler was down for repairs. However, work to make it a regular part of the operating fleet did not commence until 1974.

After 1975, when No. 1533 had been taken out of service for heavy repair work, the Consolidation would finally get a chance to shine as one of the main steam locomotives in New Hope passenger service. Sharing excursion responsibilities with smaller steamer during the late 1970s and early 1980s, it would operate both on and off home rails. One of its offline adventures took place in 1985 when it ventured down to the Fairless Works of U.S. Steel in nearby Morrisville, PA. This journey was part of a weekend-long open house for plant employees and their families.

No. 40 would be taken out of service for repairs in 1986, with various diesels taking its place at the head of the passenger runs out of New Hope. In 1990, the locomotive would receive a major rebuild as the railroad changed hands. With the assistance of Strasburg Railroad mechanical forces, the new operators of the New Hope & Ivyland Railroad (NHRR) brought the old Baldwin built warrior back to life in a matter of months as part of their plans to refurbish the historic operation.

In the early summer of 1991, No. 40 steamed for the public once again as it pulled trains through Bucks County. Since that time, the locomotive has become a favorite among both visitors and members of the railroad’s staff. In addition to its regular passenger duties, it has also taken part in several special events at the railroad. These have included special photo freights, using vintage rolling stock for the benefit of photographers and rail enthusiasts alike. On more than one occasion, it has been temporarily repainted back to its appearances on both the Lancaster & Chester and the Cliffside for these special trips. The locomotive has also proven popular on the railroad’s fall and Christmas themed excursions.

The first opportunity since 1985 for an offline trip came on May 18, 2019, when No. 40 powered four excursions over the SEPTA mainline in Montgomery County between North Wales and Gwynedd Valley, PA as part of North Wales Borough’s Sesquicentennial celebrations.

No. 40 is currently the New Hope Railroad’s only operating steam locomotive. 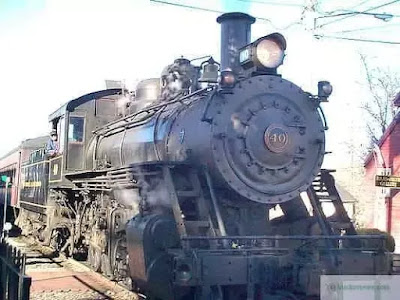 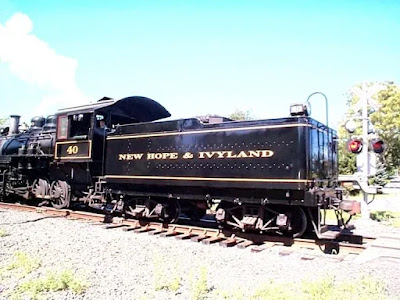 If you wold like more info about taking a ride: