My first video of 2021. On January 2, 2021 the Conway Scenic held their first annual winter steam event. This special excursion was pulled by Conway Scenic Railroad's very own 0-6-0 Canadian National steam locomotive number 7470. The excursion was pulled entirely by steam and went from North Conway to Sawyer's River. For those of you unfamiliar with the line, Sawyer's River was once a flag stop on the Maine Central's Mountain Division at mileage P74.80. It is about a half mile north of the fourth iron bridge in Hearts Location, NH. To this day a speeder shed still exist painted in Maine Central green and gray. Passengers on board the excursion riding in CP Reed or Mount Webster cars were able to get off at 4 designated photo stops. These stops were (in order) at Sawyer's River, Cobb Farm Road, "North Pole", and at P61 near Mountain Junction. In this video you will see 7470 pull 5 cars up to Sawyer's River by itself. 7470 will lead tender first to Sawyer's River and then boiler first back down to North Conway. You will also see two diesels pull a tank car at I1 towards the end of the video. This was because 573 and 1751 would plow the line before 7470 departed North Conway. The reason behind the tank car was so that 7470 could refill its water tank before heading back down south. Shoutout to those who trudged through the snow storm that morning to chase this event. Big shoutout to Northeast Rails, Merrimack & Saco Productions, Granite State Railfan, MD88Pilot, Smokebox Productions, Railfan Nate and Caleb Browne. Thanks for a great chase guys! 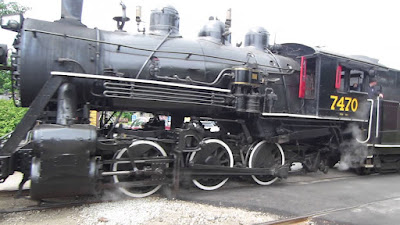