A really big H/T to Donna for sending this!!!!

In the 1960s, Glen Campbell's brilliant guitar playing was known only by a select few top recording studios and artists.
Long before Glen became known nationally as an outstanding vocalist, actor and TV personality, he was one of the most in-demand recording studio guitarists in the world.
He could have earned a 7-figure annual income as a high-end, asked-for studio guitarist for years on end if that had been all he cared to do.
Take a look at this video, one you may have never seen before. "Hi Yo, Silver, Away!"
It doesn’t get much better than this. "The William Tell Overture" by Giaochino Rossini.
Many of us grew up watching the Lone Ranger and Tonto on black and white television. Years later, many of us watched the Glen Campbell show on TV as well.
This video is a clip of a younger Glen Campbell playing the William Tell Overture (with symphony orchestra) and dedicating it to Clayton Moore, who played the Lone Ranger and Jay Silverheels, who played Tonto.
You may never have seen Glen play like this before. This is world-class guitar playing and Campbell makes it look easy; note he is playing a 12 string!  The sounds of Glen Campbell on guitar and the symphony orchestra playing Rossini's "William Tell Overture" will take you back to those golden days of yesteryear, when the strains of Rossini's masterpiece coming over the radio meant the Lone Ranger show was about to begin. 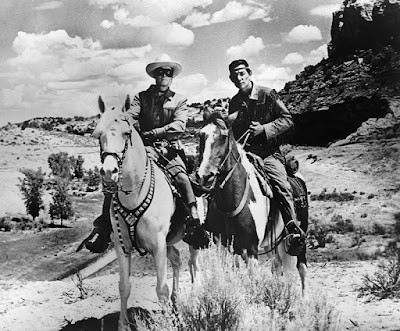