H/T to Terry for sending the video!

Morse Code, either of two systems for representing letters of the alphabet, numerals, and punctuation marks by an arrangement of dots, dashes, and spaces. The codes are transmitted as electrical pulses of varied lengths or analogous mechanical or visual signals, such as flashing lights. One of the systems was invented in the United States by American artist and inventor Samuel F.B. Morse during the 1830s for electrical telegraphy. This version was further improved by American scientist and businessman Alfred Lewis Vail, Morse’s assistant and partner. Soon after its introduction in Europe, it became apparent that the original Morse Code was inadequate for the transmission of much non-English text, since it lacked codes for letters with diacritic marks. To remedy this deficiency, a variant called the International Morse Code was devised by a conference of European nations in 1851. This newer code is also called Continental Morse Code. 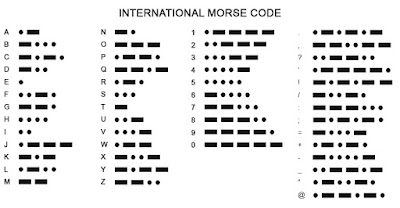