Ever wonder about all those controls the engineer uses?

•A video guide that walks through and describes the functions of the various controls in the cab of Denver and Rio Grande Western (D&RGW) steam locomotive #491. Big thanks to Mike Spera for heading the restoration on this wonderful piece of American history. •The locomotive seen in the video is Denver and Rio Grande Western (D&RGW) mikado (2-8-2) #491, one of the largest narrow gauge locomotives ever created. It now runs at the Colorado Railroad Museum in Golden, Colorado. It has ~37,100 pounds of tractive effort, and weighs ~150 tons or ~302,000 pounds. It was built in 1928 by the D&RGW Burnham shops in Denver, Colorado using the boiler off of a standard gauge D&RGW 2-8-0. #491 is a pristine example of a locomotive perfectly suited for rugged, mountain climbing work. •Thanks to Erik Lindgren (@ColoradoRailPhotographer) for the great still images used in this video. 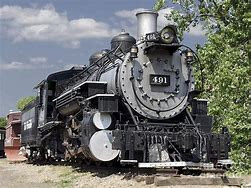