The history of Horn & Hardart began when Joe Horn and Frank Hardart became partners in a small coffee shop in Philadelphia in 1888. Over the next ten years they opened a half-dozen more, adding to the number of items on the menu and increasing the size of each restaurant. Throughout its growth, Horn & Hardart was always focused on quality coffee, and became known as having the best coffee on the East Coast.

In 1902 the company opened its first AUTOMAT on Chestnut Street in Philadelphia. The Automat was based on a European “Waiterless Restaurant” but highly modified for the United States.

"For all the good food, the Automat’s real secret weapon was its coffee. Horn & Hardart popularized fresh drip-brewed coffee. Prior to the Automat, coffee was often harsh and bitter, boiled and clarified with eggshells. The Automat’s smooth aromatic brew flowed regally from ornate brass spigots in the shape of dolphin heads. In their heyday, Automats sold over 90 million cups of their fresh-brewed coffee each year. And they were committed to keeping it fresh. When an Automat employee brewed coffee, they filled out a time card. After twenty minutes, they discarded whatever coffee was left and made a fresh pot. If there was any doubt about Horn & Hardart’s commitment to java, the Automat even adopted Irving Berlin’s “Let’s Have Another Cup Of Coffee” as their unofficial theme song." SMITHSONIAN MAGAZINE

Ten years later the first Automat was opened on Times Square in New York. From this point on, Automats became ubiquitous in NY and were highly integrated into city life. Even though the chain eventually grew to almost 50 locations in Philadelphia, it became highly identified with New York where it grew to over 100 locations by the 1950’s, some enormous in size

In the 1980’s the chain struggled in both NY and Philadelphia due to numerous reasons; some within its control and some external. Among the circumstances over which the company had little or no control were: population shifts to the suburbs, rising competition from fast food chains, rising costs of maintaining their large restaurants and changes in dining habits. The last restaurants closed in both Philadelphia and New York by 1991. 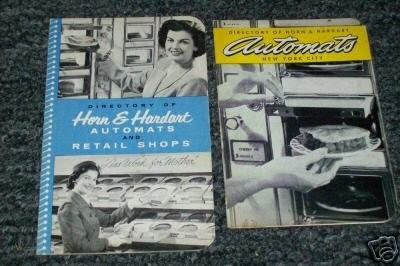 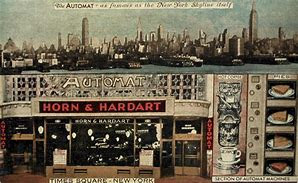