There are about 5,000 different species of ladybugs in the world. These much loved critters are also known as lady beetles or ladybird beetles. They come in many different colors and patterns, but the most familiar in North America is the seven-spotted ladybug, with its shiny, red-and-black body. In many cultures, ladybugs are considered good luck. 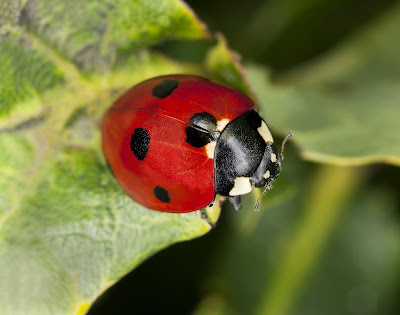 Most people like ladybugs because they are pretty, graceful, and harmless to humans. But farmers love them because they eat aphids and other plant-eating pests. One ladybug can eat up to 5,000 insects in its lifetime! Most ladybugs have oval, dome-shaped bodies with six short legs. Depending on the species, they can have spots, stripes, or no markings at all. Seven-spotted ladybugs are red or orange with three spots on each side and one in the middle. They have a black head with white patches on either side.

Ladybugs are colorful for a reason. Their markings tell predators: "Eat something else! I taste terrible." When threatened, the bugs will secrete an oily, foul-tasting fluid from joints in their legs. They may also play dead. Birds are ladybugs' main predators, but they also fall victim to frogs, wasps, spiders, and dragonflies. Ladybugs lay their eggs in clusters or rows on the underside of a leaf, usually where aphids have gathered. Larvae, which vary in shape and color based on species, emerge in a few days. Seven-spotted ladybug larvae are long, black, and spiky-looking with orange or yellow spots. Some say they look like tiny alligators. Larvae grow quickly and shed their skin several times. When they reach full size, they attach to a leaf by their tail, and a pupa is formed. Within a week or two, the pupa becomes an adult ladybug.

Ladybugs are happy in many different habitats, including grasslands, forests, cities, suburbs, and along rivers. Seven-spotted ladybugs are native to Europe but were brought to North America in the mid-1900s to control aphid populations. Ladybugs are most active from spring until fall. When the weather turns cold, they look for a warm, secluded place to hibernate, such as in rotting logs, under rocks, or even inside houses. These hibernating colonies can contain thousands of ladybugs. 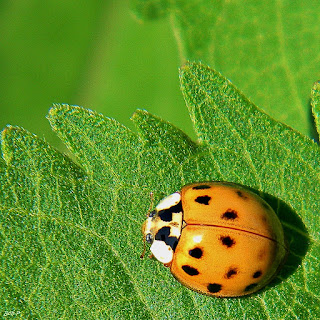 The name "ladybug" was coined by European farmers who prayed to the Virgin Mary when pests began eating their crops. After ladybugs came and wiped out the invading insects, the farmers named them "beetle of Our Lady." This eventually was shortened to "lady beetle" and "ladybug." NASA even sent a few ladybugs into space with aphids to see how aphids would escape in zero gravity.