Plenty of bells and whistles on this one! 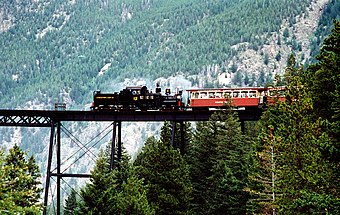 Train crossing the new High Bridge of the Georgetown Loop in 2002. Engine is a Shay locomotive.

This tourist train runs between the communities of Georgetown and Silver Plume, a distance of 2 miles (3.2 km). The route is 4.5 miles (7.2 km) long and ascends an elevation of 640 feet (195.1 m) through mountainous terrain along with trestles, cuts, fills, and a grand loop.

The Georgetown Loop Railroad was one of Colorado's first visitor attractions. This spectacular stretch of 3 ft (914 mm) narrow gauge railroad, built by the Georgetown, Breckenridge and Leadville Railway,[5][6] was completed in 1884 and considered an engineering marvel for its time. The thriving mining towns of Georgetown and Silver Plume lie 2 miles (3.2 km) apart in the steep, narrow canyon of Clear Creek in the Rocky Mountains west of Denver. Engineers designed a corkscrew route that traveled nearly twice that distance to connect them, slowly gaining more than 600 feet (183 m) in elevation. The route included horseshoe curves, grades of up to 4%, and four bridges across Clear Creek, including the massive Devil's Gate High Bridge.

The Georgetown, Breckenridge, and Leadville Railroad had been formed in 1881 under the Union Pacific Railroad. The Loop portion of the line was the crowning segment of the line, crossing the top of the gorge on a 95-foot (29 m) high trestle.

Originally part of the larger line of the Colorado Central Railroad constructed in the 1870s and 1880s, in the wake of the Colorado Gold Rush, this line was also used extensively during the silver boom of the 1880s to haul silver ore from the mines at Silver Plume. In 1893, the Colorado and Southern Railway took over the line and operated it for passengers and freight until 1938.

The line was dismantled in 1939, but was restored in the 1980s to operate during summer months as a tourist railroad, carrying passengers using historic 3 ft (914 mm) narrow gauge steam locomotives.

Interest in restoration of the Loop segment as a tourist attraction in the 1970s led to reopening of the segment. Rail line construction began in 1973 with track and ties donated by the Union Pacific Railroad, and a new high bridge was built to the same specifications as the original. The 3-mile (4.8 km) restored segment, opened on March 10, 1984, is at the upper end of the historic Colorado Central main line up Clear Creek Canyon west of Golden. The Georgetown Loop Railroad climbs approximately 640 feet (195 m) between the two towns using 3 miles of track. Passengers can board the train at depots located in Silver Plume and Devils Gate 3/4 of a mile west of Georgetown.

The train ride includes an optional walking tour of the Lebanon Silver Mine, located at the halfway point on the railroad, where visitors can walk 500 feet (150 m) into a mine tunnel bored in the 1870s, with guides pointing out once-rich veins of silver and relating the history of the mine.

Lot and lots of info here: 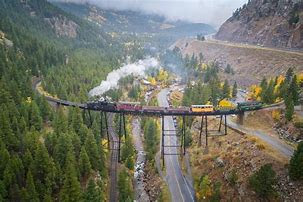 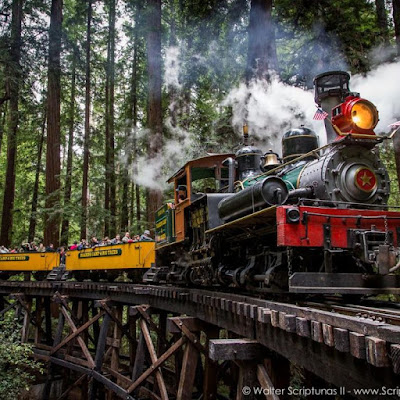